9 Common Mistakes Managers Make and How to Avoid Them 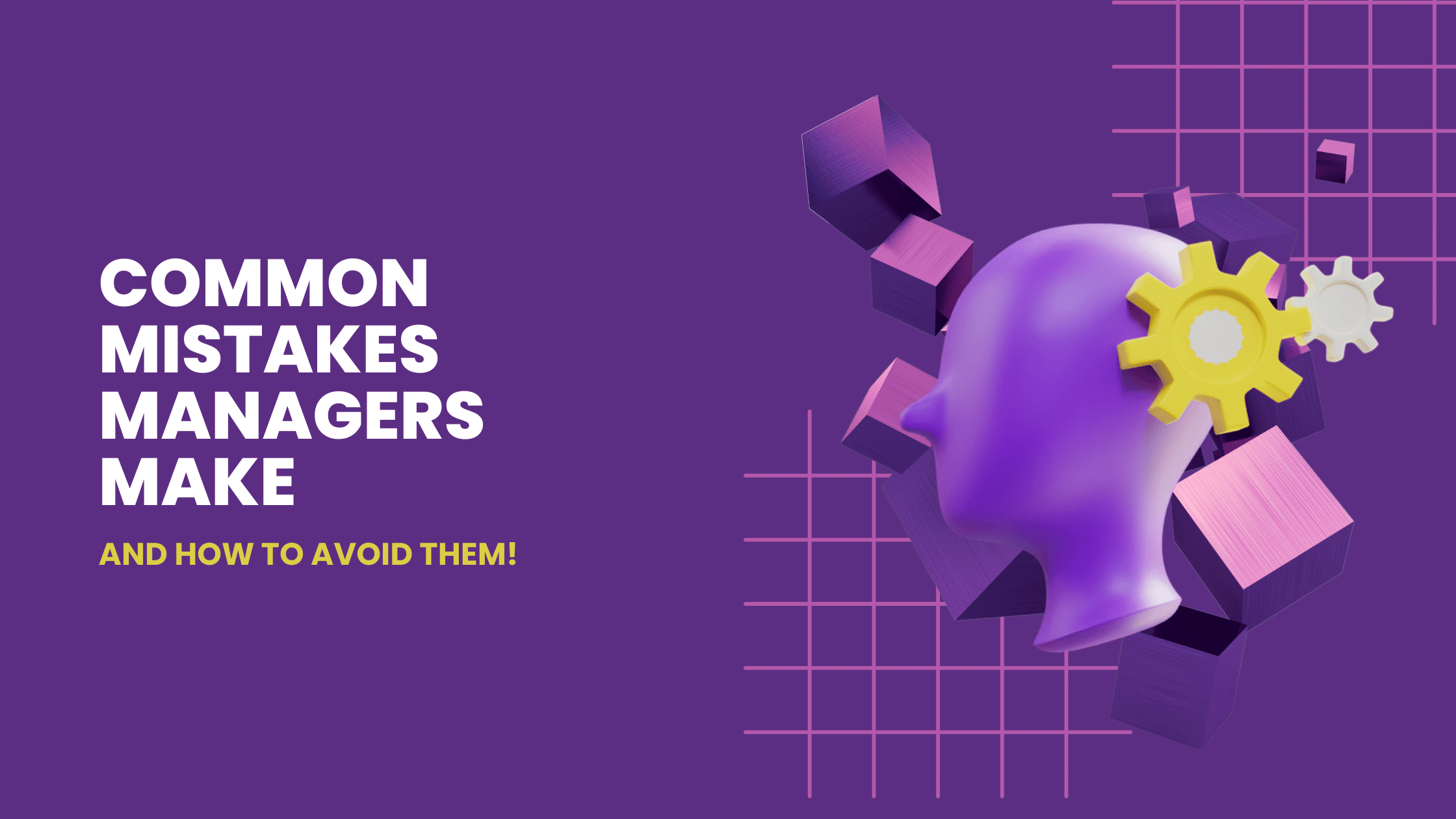 Being a manager is not child’s play — lots are at stake when you’re responsible for a team. Plenty of different moving parts are involved and you have to be able to juggle them all being the manager. So, the last thing you can afford is to make a silly or common mistake as a manager!

But, if you’re aware of making mistakes as a manager, you can be more intentional about avoiding them as much as possible. This way, your performance as a manager will improve and your team will also be more comfortable working with you.

So, what are the most common mistakes managers make?

Fear not — here’s a complete list of the 9 most obvious and familiar mistakes made by managers along with the required measures to avoid them:

Most Common Mistakes Managers Make and How to Avoid Them

When you’re juggling a million different things (which is like a day in the life of a manager 101 👀), it can be tempting to try to do everything yourself. But that’s a recipe for burnout and disaster.

Here’re the many ways the lack of delegation at work can backfire:

How to Avoid the Mistake of Failing to Delegate

If you want to be an effective manager, you need to learn to delegate NOW! But, that doesn’t necessarily mean delegating everything to everyone while you go on a vacation to an exotic beach!

Delegating at work simply means identifying which tasks can be handled by others and letting them take care of them. This will free up your time so you can focus on more important tasks such as strategizing, performance assessment, growth hacking, etc.

Of course, delegation isn’t always easy. You need to find the right people for the job and then let go of control. But as a responsible manager, that’s one of your core duties — recognizing the right talent for its rightful place!
if you can master this skill, it will make a world of difference in your ability to manage teams like a pro.

Wrong or unclear instructions, however small they may be, can lead to domino effects so big that you won’t even imagine!

So, it’s your responsibility as a manager to ensure that your team has a clear understanding of what needs to be done and how to do it. There’s no harm in taking your time to do so. Because failure to maintain that can lead to serious consequences.

How to provide clear, specific, and effective instructions at work?
Glad you asked…

How to Avoid the Mistake of Unclear Instructions

👉 When giving instructions, be thorough with the necessary details. Try not to leave room for any confusion or misunderstanding.
👉 Try to avoid using industry jargon or acronyms that your team may not be familiar with. Clarity is the key when you’re instructing your team.
👉 If there is a specific process or procedure that needs to be followed, provide step-by-step instructions.
👉 If possible, provide a visual guide or example. Nothing works like a visual cue or audiovisual experience.

These are a few of the many ways you can ensure clear instructions at your workplace. By taking the time and following the pointers above, you can help your team avoid costly mistakes and increase their efficiency!

Feedback is sometimes ignored, often forgotten, and regularly overlooked by managers. What they don’t realize is that feedback is a crucial part of managing a team. They act as a catalyst for helping team members grow and improve.

Furthermore, when it comes to giving feedback, some managers often make the mistake of thinking that it’s either all good or all bad. This bipolar nature of feedback makes it harder to choose when to apply which one.

Another mistake from the managers’ end is the lack of regularity. Remember, giving only official feedback on a yearly basis with corporate jargon is just not enough for the team members.

Providing negative feedback exclusively is a mistake of managers that come with serious consequences. Yes, it’s undeniable that addressing problems and giving team members constructive criticism are parts of the process. But it’s also important to praise team members for their successes.

Finally, some managers shy away from giving feedback because they fear it will be perceived as criticism. However, it goes without saying that feedback is meant to be helpful, not hurtful.

These are all the ways feedback can leave room for improvement in a workplace. So, what are the remedies?

How to Avoid the Mistake of Not Giving Feedback

Mistake #4: Not Being Involved

If you keep saying “we’re a team” in the team meetings and you’re hardly seen engaging in day-to-day activities alongside your team members, I’ve got some news for you.

There’s simply no alternative to being involved with your team even when you’re a manager. Lack of it can lead to all sorts of problems, from gaps in communication and coordination to a feeling of disconnection and disengagement from your team.

How to Avoid the Mistake of Not Being Involved

By being an involved and active manager, you can avoid all sorts of problems and create a strong, cohesive team that is more likely to succeed.

Failing to listen properly and timely to your team members is a mistake you simply can’t afford to make as a manager. This can lead to consequences like misunderstandings and miscommunication — ultimately damaging the morale and productivity of the team.

When your team feels not heard enough, it negatively affects the entire team spirit. Your lack of listening will also impact the chemistry between you and your team.

How to Avoid the Mistake of Not Listening Properly

To prevent this issue from happening, you should make a point of really listening to your team members. This means taking the time to understand what they’re saying, and being open to hearing feedback and suggestions.

Additionally, you should encourage team members to speak up and voice their ideas, so that everyone can be on the same page.

Following steps as simple as these, you can avoid the pitfalls of poor communication and create a more positive work environment around yourself.

It’s easy to get disappointed when the expectation itself isn’t clear enough. If you can’t convey what you need, you shouldn’t expect to get the desired results.

At workplaces, one of the most common mistakes managers make is failing to communicate their expectations. This can lead to confusion and frustration on both sides, and can ultimately result in poor performance.

In addition, this lack of communication can break the harmony of a team as the team members will get frustrated and confused over what’s wrong with their work and why the outputs are not up to the mark.

How to Avoid the Mistake of Not Communicating Expectations

Last but not least, be sure to check in regularly to ensure that everyone is on track. That way, you’ll make sure that your expectation was communicated properly and also being executed accordingly.

Mistake #7: Not Being Available

This is a regular issue found in modern workplaces — unavailability of the managers.

This can manifest in several ways, from not being available for meetings to not responding to emails/phone calls in time. In short, team members can’t get hold of the most important person for their everyday activities, and resultantly, their frustration goes through the roof!

Not being available to team members can also create a feeling of distance and disconnection between the manager and the team, which ultimately paves the way to a decline in morale and productivity.

How to Avoid the Mistake of Unavailability

It’s clear that the problem needs to be nipped in the bud. In other words, there’s no alternative to being as accessible as possible to your team. This can be achieved by simply being available for meetings, responding to emails and phone calls, and ensuring presence and engagement with the team.

By being accessible, you can build trust and rapport within your team. These will help you create a positive environment at work where open communication and collaboration can truly flourish!

💡 Micromanagement can be defined as a management style where a manager closely observes, excessively controls, and actively engages with the minute details of the work done by the team members.

While the merits and the demerits of this method is debatable, immoderate use of it can seriously hamper the effectiveness of a team.

There are multiple reasons why micromanaging is considered a mistake that managers make, namely —

… and many other reasons!

How to Avoid the Mistake of Excessive Micromanagement

So how can managers avoid unnecessary micromanaging?

👉 One way is to delegate tasks and projects to the team members, and then put your trust in them to complete the tasks successfully.

👉 Also, managers can give team members some breathing space in how they go about completing their work, as long as the end result meets the desired goals.

👉 Managers can schedule regular check-ins with teammates instead of constantly monitoring their work, which can provide a more balanced approach for everyone involved.

These are worth the try, right?

You’ll be surprised, actually, how these little efforts in avoiding excessive micromanagement can go a long way in establishing a strong bond with your team.

Mistake #9: Not Checking in with Team Members

Managers are often so busy trying to get things done that they forget to check in with their team members. This may lead to them feeling isolated and undervalued. And you, as a manager, can’t afford to make this mistake to demotivate your entire team!

So, what’s the fix for this one?

How to Avoid the Mistake of Not Checking in

The solution is simple — you, as a manager, just have to make a habit of checking in with your team members regularly. This doesn’t have to be a long conversation, but it should be a meaningful one. Ask how they’re doing, what they’re working on, and if there’s anything you can do to help.

This simple routine can make a world of difference to how your team members perceive you as their manager!

🔔 RECOMMENDED: How to Improve Your Management Skills (10 Hacks You Shouldn’t Avoid)

So, that’s the end of today’s list of the most common mistakes managers make and how to avoid them. We hope that by understanding these mistakes, you can avoid them in your own career and become a more effective leader.

This site uses Akismet to reduce spam. Learn how your comment data is processed.

Do you want to know more about inbound marketing and content marketing? Don’t know how to differentiate these? Then this blog can help you. At the end of this blog, you will have clear knowledge Read more…